Recently, I was driving with my daughter while we were eating some chocolate milkshakes. My daughter looked over at me driving and said... "oh, that's smart..."

Miss P: Oh, that's smart!
Me: Huh? *mouthful of chocolate milkshake* Merfhe mrrrt?
Miss P: Your knee. Driving with your knee.
Me: Oh, yea, well, I need my hands to eat my milkshake. I used to do this all the time with my Slurpees.
Miss P: Cool. Is it hard?
Me: *thinking* Well, no. Not really.
Miss P: Oh... looks hard.
Me: Well, I guess it was hard... you know at one time.
Miss P: Oh.  *seems unconvinced*
Me: But, you know, everything was hard at one time before you got good at it.
Miss P: *looks confused* Huh?
Me: Pooping used to be hard before you figured out how to do it right.
Miss P: Daaaaaaaad! Did you have to talk about poop!?
Me: No seriously. Have you ever seen babies poop?! The scrunch their faces up and they try so hard!!! Their little faces turn red and they grunt and just try so hard. It's like... WAAAAAAAAAH! They just eventually give up and cry. It's apparently very hard to poop, until you practice it and get better at it. Then, it's not so hard.
Miss P: I just. I don't. I mean. Whhhhhaaa?! Why poop!

I know I haven't been blogging much lately... *checks the stats*  Apparently, 8 post in the whole of last year, and what, 6 this year so far (and most from the Wife)?!  And I'll be honest the reason why I have not blogged lately is that life is pretty hard right now.  You would think after fourtermufff years or so, you'd have this life thing all figured out.  But nooooooope.

Or at least, I don't really have it all figured out yet.

Most days, recently, I feel like I'm in the baby phase still trying to learn how to poop, and every blog post I start ends the same way... like I'm just crying about things that aren't going super awesome.  :-)  But I guess that's not really the point... next week, next month, next year, the things that are hard now - are they still going to be hard?

... well, yes.  Probably.  But that's depressing to think about.

I'm just going to tell myself that things will get easier.  :-)

So, in no specific order, I'm going to list some things that have happened since I last blogged... (I'm not counting the posts my wife does... they don't count.  I should change the blog password.  But since she's the only one who has posted anything in in the last 3 years... maybe I best not change the password just yet...)  but anyway, some of the "less than optimal things which have happened which probably could have happened a different way and I'd have been OK with that... things..."!

I mean, that's just a few of the ones I'm able to laugh about now... then there are others...


Really, the list goes on.  But I'm gonna stop there.
Because as daunting as that list looks, there are many other things I could add.... but it doesn't really matter.  I figure this is still me in my learning to poop phase.

I'm not worried, or panic'd.

I'm able to (try to) rest in His provision and know that someone is in control.  I've seen so many blessing each time something goes wrong.  Seriously!  How does a car drive through your house wall?!

But, if we are having a coffee, and your ask "How you doing?" ... just know, I'll probably just lie and say "Great, yeah, everything's great..."  But if you are left with this feeling of "Boy, he makes life look easy", or "He's got everything together" I don't.

I'm just a baby.
Trying to do something, grunting, turning red in the face, and probably crying.  Crying in a manly way though.  Not some wimpy cry.  Manly tears, that when they fall to the ground cause a mighty Oak Tree to spring up.

But years from now, when I'm crouching behind some hollowed out building, dodging laser fire from the robot overlords trying to take over the world, and someone asks me ... "was that hard?", I'll think back to this time of no VISAs, children with special needs, life in China, uncertain futures and laugh...  Because I'm sure that whatever I'm facing in the future, all THIS, has just been training for THAT.

But BattleToads... that's just messed up.  I mean, WHO would MAKE that game and sell it to children!  That's gotta be some form of abuse or something!  BattleToads was just wrong, man. 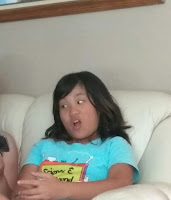 And now that I'm finally got all this complaining out of the way, I can probably return to more regular blogging, NOT complaining about how hard everything is, but get back to the funny.

Oh, and those pictures of Miss P?  Those are the photos I took while her Auntie was showing her an animated educational video about "Where Babies Come From"


Seriously...  BattleToads...  WHAT THE CRAP!  (I apologize to anyone who never played BattleToads and doesn't understand my frustration... for you ladies out there, think, trying to explain the colour difference between Bavarian Creme and Minced Onion to your man (Yes, real paint colour names, yes, they look identical ... well, maybe there's a hint of green in the Minced Onion... oh I can't tell!  Just PICK A REAL COLOUR!!! *sob*))
Posted by Adrian at 11:33 PM