Miss G recently celebrated her 8th Birthday!  The wife thought that a great gift would be a new bike... since Miss G was asking for a new bike, it kind of made sense. 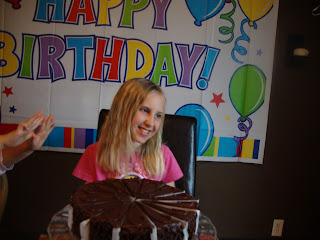 So we got her a bike for her birthday.

Actually, we got her 4 bikes.

See, we started off by getting her a Pink BMX bike, thinking she would like it cuz it was pink.  However, the Wife was talking with Miss G while they were playing at the park with friends, and Miss G's friend had a Pink BMX - to which Miss G mentioned that she did NOT like the BMX style bikes.

So then the wife called me on my way home, and informed me that Miss G wanted a Mountain Bike style bike.  I frantically drove to three different stores to try to find a Pink Mountain Bike.  The closest thing I could find was a pretty White mountain bike, with purple trim.  Pretty enough I though.  So I bought bike number two and threw it in the back of the car on the way home.

Upon returning home, it was discovered that Purple was *not* one of the colours Miss G likes.

So I grabbed the boys, threw the previous two bikes in the back of the van, and ran back to Wal-Mart to buy Bike #3.

When I returned the first two bikes to the local Canadian Tire, the store clerk asked why the bikes were being returned to which I answered "They were not pretty enough".

After purchasing the 3rd bike from Wal-Mart, I thought we were done.  We had finally found a pretty pink mountain bike for Miss G! 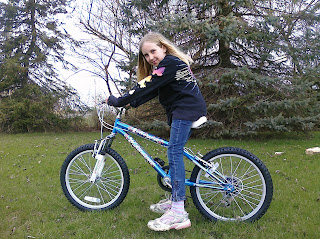 As you notice in the picture above, the bike however, is *not* pink.

When she woke up in the morning, her new Bike, bike #4, was set up in her room waiting for her.  The first thing she said, while still mostly asleep was "Ooooh, pretty colour."

It is so satisfying when as a parent, you actually get something right... even if it takes 4 tries.  :-)