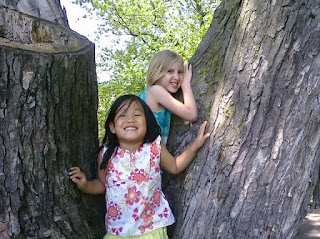 Chinese Co-Worker (CCW):  How come the room is dark?
Me:  So I can practice Chinese!
CCW:  Huh?
Me:  Ke yi kai .... uh, light?
CCW:  Aaaah, 可以开灯？
Me:  Yes!  That!  Exactly what I was saying.  Can I turn on the lights.
CCW:  It is actually "can I open the lights".
Me:  What?  Why would you OPEN the lights?  That makes no sense.
CCW:  Why would you "turn" the light?  Or, "on" the light?  Are you standing on it?
Me:  Listen now, I'm the native speaking English person around here.  Even if what I say isn't gooder than what you think it is that I should be saying, I'm still right.  Because, well, I'm the native speaker!  How do you like 'dem apples!
CCW:  You know, I studied English for over 12 years in school.  How much English did you study?
Me:  Uh, well, ummm... none.  But that's because I'm a native speaker!  I don't have to "study" it.  I just know it!
British Co-Worker (BCW):  Blimey!  Did you perchance happen ta catch the Rugby game last night?  The Canadian team played the Tongan team right out of the park!  There were some spectacular tries in the contest!
Me:  Whaaaaat?!
BCW:  Yea, it was totally ace!  Fortunately there wasn't any aggro after the pubs shut.
Me:  English!  Speak English man!
BCW:  Wha' da bloody hell is this tosser blathering on about?
CCW:  I have no idea.  Oh hey, can you turn on the light please?
BCW:  Cheerio.
Me:  AAARRRRRGGGGHHHHH!

Shortly after that conversation, I was still mulling over the differences between ON and OPEN'ing the light.  I suppose, that OPEN is the more correct term.

Hearkening back to my days as an Electrical Engineer Technologist, I remembered that electricity does in-fact "flow" ... and in that, by OPENing the light, you are allowing the electricity to flow to the light.  The light switch is like a dam being opened and closed.

As for TURNing, I can TURN left, I can TURN right.  I can TURN down the volume, or TURN up the volume.  In either case, TURNing is changing a direction... or course... or state?

No, I can't say it is wrong, mostly because it has been drilled into my head that THIS is the way we say/do things.  My light is TURNed ON.  But it is neither ON something, nor has it's location been changed.  State?  Maybe... I guess the light was previously OFF.  OFF... why is my light OFF?  If it was OFF, maybe it FELL OFF the wall, and I need to put it back ON the wall.  ARGGGH!  Now I'm confused!

Sooooo, I guess my co-worker was right!  DANG IT!  I hate that!

Oh, wait!  WAIT!!!  :-) In terms of circuitry, circuits are either OPENed (ie: non-closed loop, meaning no power flows which means the device is OFF) or CLOSEd (ie:  closed loop, meaning power can flow and device is ON).  So, if my LIGHT circuit was OPEN, then NO POWER could FLOW and the light would be OFF!  Er, CLOSED?  Uhhhh... DARK!  My light would be DARK!  BUT, if I CLOSED the light circuit, then electricity could flow and the light could TURN ON!  Or, OPEN!  errrr... uh... it could be BRIGHT!  Either way, I have to OPEN the switch to CLOSE the circuit so that the light can TURN ON.

I'm sure that there are a million things I do which to me makes sense to me, like turning on a light,  These are just ingrained things I've learned from my up bringing, past experiences and family, etc.  Our adopted children may have very different views on such things.  I'm sure my daughter watches me every day going "I just don't understand him at all."

In fact, there are many times where I feel like I'm telling Ping to TURN ON the light and she is trying desperately to tell me that it is already OPEN.
Thankfully, my kids are smarter than me.  They must have caught onto this ages ago.  Because Ping, now every morning, crawls into our bed, and snuggles up with me.  Wraps my arm around her, and then goes back to sleep.  That kind of father/daughter closeness was lost in translation when we first met.  But I'm so glad that she is starting to understand what I'm trying to say... and I'm enjoying trying to figure her out too.