My father is an interesting person.  Over the 34 odd years of which he has been my father (which also happens to be the number of years I've been his son), he has accomplished many things.
You would *think* that with such a long list of accomplishments in his life, that he would have some treasured nuggets of wisdom to pass onto his children.  Especially when you consider the whole "Masters in Theology" thing. 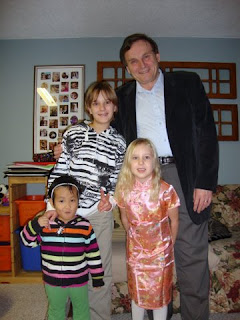 Alas, growing up, I was left with such nuggets as :
Now, I'm not saying ALL advice bestowed upon me was bad.  In fact, although lacking in the poetry of Plato, Aristotle, or even Douglas Hofstadter - the advice normally given was correct, and quite useful (had I followed it in my youth).
I should also add that over the years, his advice has gotten better... or maybe I've gotten better at listening to it.  But anyway...
Recently, something happened at work which was down right ugly and unpleasant.  After suffering though what was probably my worst week professionally, I gave my Dad a call.  It was so wonderful to hear his sympathetic voice on the end of the line and to be able to say "I understand.  It will be OK" took away so much of the anxiety and worry I was feeling.  It was so freeing to be able to say "Dad, this sucks" and have someone you love and trust be a soft landing place - without judgement or anything like that.
How often do I take that for granted?
See, my father has taken the last 34 odd years of my life building that trust and love.  And I'm sure at times it wasn't easy.
That is what we are doing now with our children.  Now.  Every day just building that trust and love.  Biological or adopted.  So that one day... my child can call me up and say "Dad, this sucks".
When that day comes, I will know that I have done my job as a father well.
Posted by Adrian at 8:34 PM