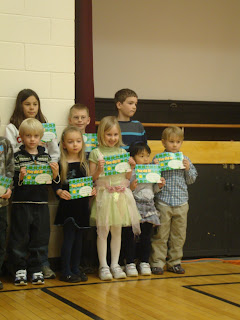 Every month at the childrens school, they have an awards ceremony for children/students who have shown great character and determination, or some other wonderful quality obviously obtained through the genes of their mother.

My beloved children have won a myriad of such awards. From being polite, to determined, smart, good looking (obviously obtained through the genes of their father)... you know. The usual.

I also won many awards when I was in school. Mostly, well, I guess you can't really call them awards... but I DID garner alot of attention from the teachers! And principals. And maybe some law enforcement officers... and social workers... but I digress too much.

Point is, this last month, at the general assembly, our Dear Daughter #1 (DD#1) won an award for Perseverance! We were so proud of her. It has been a hard(er) go for her, to go from the baby of the family, and her fathers one and only princess (Okay, NOT that I am promoting Avril Lavignes music, she has that one song "Girlfriend" where her line is "hell yea I'm the one and only Princess" - and it TOTALLY makes me think of my DD#1) to an instant Big Sister with a (somewhat) forceful (somewhat) bossy (somewhat) determined Little Sister.

I was so proud of her to win this award, because it really showed that even people on the outside, can see how great our children are, even when they go through hard times, and when things don't always maybe go the way they want.

There was my DD#1 shyly standing up, slowly walking towards the front of the assembly, hands to her mouth (as she is prone to hold them when she is nervous) and head looking embarrassingly at her feet. It really was one of those moments that makes you proud to be a Dad.

Then, Ping also won an award for Perseverance (and who jumped up and basically charged the stage waving to her adoring public). And rightfully so, I'm not going to re-hash all the things she has had to persevere through just to survive in this world thus far, let alone being taken away to a (somewhat) cold land with (somewhat) scary people with a (somewhat) hairy Yeti who keeps chasing her looking for hugs and kisses.

So here is to those moments when the world seems right, when your parenting efforts pay off, and more importantly, when you as a proud father can stand up, full of pride and take all the glory and honour and praise for a job well done parenting your children (somewhat) made possible by the efforts, blood, toil, sweat and tears of your wife's hard work.