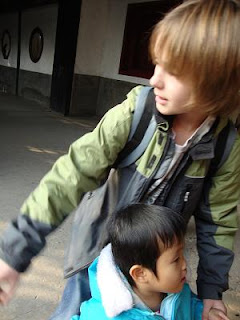 jeal⋅ous
–adjective
1. feeling resentment against someone because of that person's rivalry, success, or advantages (often fol. by of): He was jealous of his rich brother.
2. characterized by or proceeding from suspicious fears or envious resentment: a jealous rage; jealous intrigues.

Wife: Ping totally spent the whole day crawled up on my lap and cuddling with me.
Me: Really? Ping, come to Baba!
Ping: Bu YOW!!!

Wife: Did Ping keep you awake last night?
Me: Um, no. Cuz after she crawled into bed with you, she kicked me out. Hey baby!
Ping: BU YOW!!!

Its a good thing I'm not jealous.
And maybe a little thick skinned... skinned... not skulled... you can stop laughing Mike/Rob/wife.

Bah, anyway. Our Daugther #1 (or Kid #3) has started requesting a little more attention than normal. Well, maybe not more attention than normal, she has always gotten alot of attention. But if Ping happens to climb up on my lap (presumably because of a mistake, lapse of judgment, maybe she thought I was Ma ma, etc), then Daughter #1 runs over and scampers up my leg as quick as she can and cuddles in.

If Ping is running around with her pants falling off (which happens often... she has no bum), well Daughter #1 pulls her pants down to show her plumbers crack and runs around as well.

I guess I should be happy... at least they are not fighting with each other, but I do see that the older (previously only Princess) is maybe a little worried about *not* being the only Princess anymore.

As someone said, "She [Daughter #1] is being de-throned"... and I don't want that (not that its a bad thing, maybe she should spend less time on the Throne).
But I don't want her to think that either.
I would love it if Daughter #1 can simply realise that there are now 2 thrones, for 2 Princesses. I'm sure this is just normal adjustment stuff. If Ping was brought into the family at a younger age, then Daughter #1 would have had an adjustment period as well, but it would have been more gradual. A 6 month old baby can not compete with a 5 year old in terms of running around 1/2 naked... But our Daughter #1 is now being thrust into a situation where she has to immediately be OK sharing us with a sister who is 4... there was no real gradual integration.

Oh well. It's all good. Ping is still happy. Driving to church on Sunday, she was the only child happy and singing away in the back seat. The oldest was a little too tired to be happy (when did the hormones start kicking in, and why didn't anyone warn me?! Huh, whats that? Oh, you say you gave me a book to read about pre-adolescence? Hm, interesting. I don't remember you giving me the book... oh... its beside the bed on my end table. No way. If it was there I would have see... oh, look. There is how. Never mind), the middle one was a little miffed I think cuz he isn't allowed to play video games on Sunday, and the Daughter #1 was pretty quiet...

It will all work itself out. And really, the ups are out numbering the downs by a HUGE margin.
Posted by Adrian at 11:56 AM