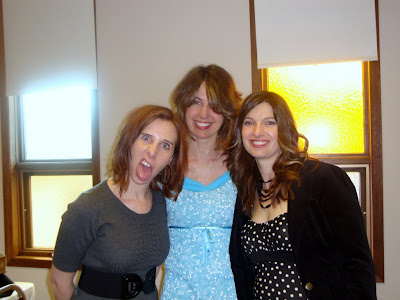 I often talk about our children in this little place of insanity some like to call a blog. And in particular, I tend to talk mostly, about the new(est) addition to our family, our dear daughter Ping.

However, it occurred to me that the name of this little place of insanity is "Forever Family", not just "Forever Some Little Chinese Girl Yelling At Me In Mandarin"...

... so to that end, I intend to maybe capture a little more of the whole Family in my b__ging endeavors.

And I thought, I would take this moment to explain why I love my wife. This might also help answer some questions for Uncle Dwayne.
Uh, thats her, in the picture above... no, not the one on the right... or the middle... the one on the left. Yes, your left. Thats right. In the grey dress.
I'm so lucky!
But back to why I love my wife, I'm gonna break it down with math... :-)
Alright, so we are down to 300 Million possible wife-ly types which could possibly do the jorb of my wife... that is, mostly, putting up with me and trying to raise 4 children.
We're not done yet though... if my mother was right, I will NEVER meet a woman like her.
The problem now, is that I'm currently 33... which means, I'm looking for someone between the ages of 25 to 35.
Things are starting to look pretty bleak right about now.
Of those 25,
... which leaves me with 1.
1 Viable Option of a Woman who can do what my wife dose. And thankfully, I already found her, and she actually married me.
I'm so Lucky. :-)
And I guess the bottom line is, if you are lucky enough to find that one special person whom you love, and loves you back, then never let go, of them. Never hold on, to anger, resentment, bitterness. Always give love, no matter the cost. And to quote something a very wise man once told me many years ago, "Remember, the one who wins the fight, is the one who says 'I'm sorry' first".
Posted by Adrian at 3:52 PM