Am I Canadian Now? / China Shoes 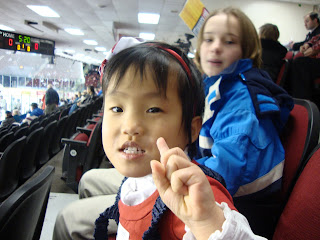 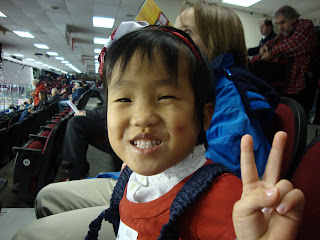 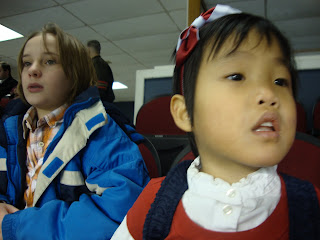 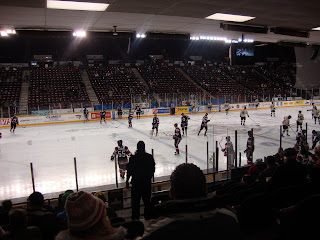 We may have gotten Pings Canadian Citizenship card recently, however, I think what REALLY made her Canadian is the fact that she has not attended some junior Hockey games. :-)
She may not have known what was going on the whole time, but that didn't stop her from watching and cheering and clapping!
Again, I am amazed at this little persons ability to adapt to a new life so quickly. There are so many times when you might think, "well, what do they really remember" from before they were brought home... and I think it is far more than we think.
When we first met Ping she had a pair of very shiny colourful shoes. We didn't think much of them, and quickly replaced them with new warmer shoes for her once we arrived back in Canada. Warmer shoes... go figure. Well, as luck would have it, the other day Ping was in the Laundry room with me helping with the Laundry (remind me to post a picture of that later), and she found her colourful shoes tucked away in the corner. You would think she was Indiana Jones and she Finally found the Holy Grail... she runs over, dodging and weaving though a labyrinth of power saws, screw drivers, stacked bags of concrete (don't ask), towering shelves of old computer parts and digs them out from underneath a stack of dirty clothes.
She brings them out saying "Happy Birthday Shoes! Happy Birthday Shoes!" We had suspected that the shoes were given to her just before she left China as a going away gift from the Orphanage. Turns out that they were given to her for her B-Day, which was just a couple of weeks before we arrived to take her home.
Well she carries the shoes upstairs, and starts dragging them around the house with her. She is very possessive of these shoes, they are very important to her. And they are important because she remembers they were given to her before she left.
One night the girls were cleaning up the foyer - just putting the shoes by the back door, and Gemma picked up Pings "Happy Birthday Shoes". Well Ping threw a fit! It doesn't happen all that often that Ping freaks out over something like that. Normally, she won't want to share as easily as we would like, but upon being asked to share nicely, she will.
These shoes tho... well... there was no reasoning with her.
Gemma gave the shoes back to Ping, and order was restored in the land.
I guess the thing which really struck me here was not just that she "remembered" these particular shoes from China, but that they were still really "important" to her.
If Ping is that worried and feels that deeply about her Shoes, then how much is she missing the rest of China and her old "home"?
Probably far more than I expect...
What, or more importantly, WHO is she missing from China?
And if she is missing China as much as she misses her shoes, why do we not see it everyday? She runs around and plays, and laughs, like she has been in our family forever... am I blind in not seeing something different? Should I be noticing something else?
Last-last Saturday, we were all downstairs eating our Pizza and watching the "Family Movie" for Family Movie night, when, in the midst of the movie, Ping just started crying. There was no reason, no rhyme. Nothing happened. No one touched her, she wasn't tired, it wasn't late, she wasn't sick.
It was the weirdest thing in that she just started crying... for no apparent reason...
... the only thought I could come up with, is that she is "grieving".
... finally.
And thats Good! She has to process those feeling and start to deal with them, to deal with the "loss" she has encountered.
Now, we just have to help her walk though it...
Posted by Adrian at 6:07 PM